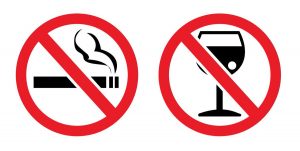 Smoking and alcohol in Medical Abortion

Artificial termination of pregnancy, in general, and Medical Abortion (MTP), in particular, impose restrictions on the use of any alcoholic beverages: 48 hours before taking Mifepristone and within 7 days after – you should entirely refrain from alcohol.

The reason for the prohibition lies in the mechanism of action of the drugs (Mifepristone and Misoprostol): during the MTP procedure, damage to the blood vessels of the endometrium (the inner lining of the uterus) occurs, which is accompanied by bleeding, and the longer the gestational age, the more pronounced it (bleeding) is. Ethyl alcohol, in turn, causes an apparent general expansion of blood vessels, including those of the uterus. With the combined use of Mifepristone / Misoprostol with alcohol, bleeding will be more substantial, leading to other complications (anemia, decreased immunity with subsequent purulent-inflammatory pathologies, etc.).

Regarding smoking during the procedure of medical abortion, there are also some prohibitions. It is necessary to limit tobacco as much as possible (it is better to stop completely) 3 days before taking the first drug (Mifepristone) and 7 days after.

Restrictions are associated with the effect of nicotine. Nicotine causes the production of adrenaline, increasing the pulse (heart rate) and BP (blood pressure). With the detachment of the endometrium, which occurs during pharmacotherapy under the influence of drugs, a rupture of blood vessels also occurs, logically leading to bleeding. If heart rate and blood pressure increase (in this case, when nicotine enters the body), then bleeding will be more pronounced and can lead to the complications described above.

In addition, under the influence of Misoprostol (mainly), the contractile activity of the uterus is provoked, which, along with increased heart rate and blood pressure, increases the load on the heart (myocardium) and can exacerbate the existing cardiovascular pathology.