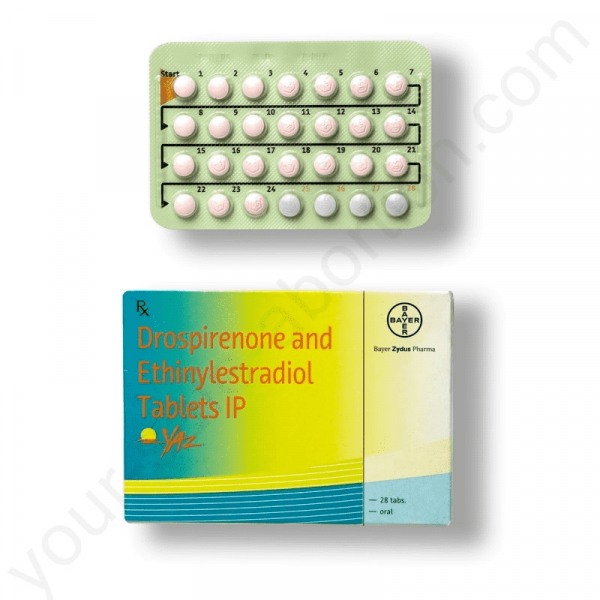 Yaz is a combination oral contraceptive tablet. Apart from preventing conception and pregnancy, it is beneficial for various women’s health problems.

How Is The Yaz Contraceptive Pill Used?

The term ‘Combination Pill’ refers to the presence of two critical sex hormones, Estrogen and Progestin, which govern conception and menstruation, respectively.

The Yaz Ingredients, Their Availability, And Their Presentation

Yaz components are classified into two groups. The estrogen Ethinyl Estradiol and the progestin Drospirenone are found in YAZ. Yaz is marketed by ‘Bayer Schering Pharma’ in blister packs containing 28 tablets.

There are 24 active ingredients in these tablets, including Ethinyl Estradiol and Drospirenone. These active tablets are light pink. The remaining four pills are colorless and inactive, indicating they have no impact on the body’s hormonal system. Instead, they are given to act as reminders to finish a 28-day program that corresponds to the average woman’s natural menstrual cycle.

The back of the blister pack displays the rows of tablets and the days of the week, facilitating dosing without missing a dosage.

Yaz Dosage And Directions – How to Get Started

Yaz is effective for seven days after the commencement of the first pack. The full instructions and Yaz dosage for birth control are as follows:

Missed doses are concerning since they reduce the drug’s blood levels and the Yaz tablets’ ability to provide contraceptive protection.

Please take it as soon as you remember and take the following day’s pill regularly. This may need the administration of two tablets in a single day. Following that, the rest of the pack is completed customarily.

Take two tablets on the recall day and two pills the following day. Seven more days of protection are required when using barrier contraception such as condoms or a diaphragm. Typically, the rest of the pack is subsequently finished.

Replace the current pack of pills with a new one that contains seven days of additional barrier protection.

Have you neglected to take three or more pills?

Replace this pack of pills with a new one, but use supplemental barrier protection for seven days.

You may have irregular periods if you miss pills, primarily two or more, but they should continue after the second packet is done. In any case, you must see a physician if you miss two consecutive periods.

Clinical Pharmacology – How Does Yaz Work?

The combined effects of Ethinyl estradiol and drospirenone act in various ways to impair conception, the most important of which is the inhibition of egg release or ovulation.

FSH and LH are essential to brain hormones with ovarian and uterine effects. While FSH is required for the slow growth of the egg, LH is necessary for ovulation, the process by which the ovary bursts to release the egg (by a mid-cycle rise in its levels).

Finally, Yaz may act as a barrier to sperm entering the uterus. It helps to thicken secretions at the uterine mouth or cervix. This uterus area resembles a bottleneck, and when Ethinyl estradiol and Drospirenone are injected, sperm movement is impeded.

Yaz is generally used as a method of contraception or birth control. It is an easy-to-use method of contraception that does not affect foreplay, is inexpensive and convenient to store, and, most significantly, does not impair future fertility when stopped. When used consistently and adequately, effectiveness in preventing pregnancy is quite good, with failure rates as low as 1 to 2 per 100 women per year.

Yaz For The Treatment Of Acne Vulgaris:

Yaz’s Ethinyl estradiol concentration indirectly decreases the amount of testosterone circulating freely in the blood. Although this is a masculinizing hormone, women generate it in minimal amounts, suppressing it alleviates acne vulgaris or pimples. Additionally, females with excessive hair growth or hirsutism may have their hair controlled.

Yaz for the treatment of PMS (Premenstrual Syndrome):

Yaz contains a substantial amount of Drospirenone, which has anti-mineralocorticoid action. This mechanism of action suggests that Yaz may reduce water retention and engorgement of tissues, most notably the breast and pelvic regions, hence relieving Premenstrual Syndrome symptoms such as breast fullness or pain and pelvic cramps.

Additionally, combined contraceptives benefit other facets of female health, including the following:

Prolonged usage decreases the risk of ovarian cancer by around 40% and endometrial (uterine wall) cancer by 50%, with benefits lasting 10 to 15 years after discontinuing the pill.

Additionally, the probability of acquiring benign disorders such as Pelvic Infections, Breast Cysts, and Uterine Fibroids is lowered.

These are common side effects of combined contraceptives, such as the Yaz birth control pill. However, the most likely side effects will be transitory and often treatable.

Women who smoke, have had past blood pressure or heart problems, or have a family history of blood clotting events or disorders are more prone to have heart attacks, hypertension, strokes, and blood clots (venous thromboembolism). These are more frequent in those over the age of 35. Drospirenone, more than other progestins, increases the risk of venous thromboembolism.

Cancer Risks: There is a little but statistically significant increase in the risk of developing breast cancer, which declines progressively over pill-free years and disappears after ten years. Certain studies have shown an increased risk of cervical cancer, albeit this may be due to factors such as sexually transmitted illnesses, which are more frequent among pill users for various reasons. Although liver tumors are sporadic, they are possible. Gallstones, jaundice, and gall bladder issues have all been reported.

Yaz Birth Control Pill should not be used in certain circumstances.

The following precautions must be maintained while using Yaz birth control:

Because Yaz does not protect against sexually transmitted illnesses or HIV, barrier contraceptives must be used concurrently with the pill.

Yaz will not harm an unwanted pregnancy while on contraception, but it must be stopped immediately if the pregnancy persists.

Yaz affects lactation by lowering the amount of breast milk produced, requiring the use of other means of contraception during nursing.

Effective medications that affect the effectiveness of oral contraceptives include the following:

Rifampicin (for tuberculosis), Ampicillin, Metronidazole (for vaginal infection and irregular bowel motions), and Nitrofurantoin are all antibiotics (for urine infection).