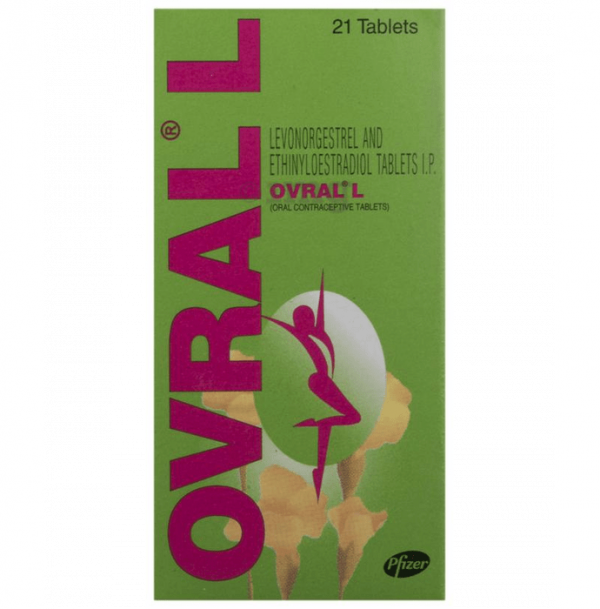 Ovral L is a tablet used for contraception. By design, it is a mix of estrogen and progestin, both at low enough dosages to prevent pregnancy through various methods while keeping a minimal side effect profile. Its collateral benefits in menstruation dysfunction make it a diverse treatment option for different women’s health problems.

What Is Ovral L Tablet?

Ovral L is manufactured and marketed by ‘Wyeth,’ a division of Pfizer Pharmaceuticals Ltd. It comes in a blister pack with 21 tablets.

Ovral L is also available in blister packs with 28 pills, with the 21 active hormone tablets remaining intact and seven dummy or placebo tablets added. These inert pills are composed entirely of non-medicinal ingredients. A white tint indicates the active tablets, whereas a pink hue indicates the inactive pills.

Clinical Pharmacology – How does the Ovral L Contraceptive Pill work?

In everyday women, a feedback loop of hormones acting at several levels of the human body occurs. For example, LH and FSH are two hormones generated in the brain that affect the ovary and uterus, respectively (womb). FSH progressively thickens the uterine lining and prepares it for the entrance of a pregnant egg or zygote. Simultaneously, LH induces the ovary to rupture in the middle of its cycle, releasing the egg for fertilization.

When synthetic estrogen-progestin combinations are administered exogenously, such as using an oral contraceptive pill such as Ovral L, they flood the circulation and suppress the release of the gonadotrophic hormones FSH and LH, thereby preventing ovulation.

Additionally, the pill’s combination of hormones causes the uterine lining to grow abnormally ripe and mushy, preventing any fertilized egg from implanting properly.

At mid-cycle, the naturally existing mucus plug at the mouth of the womb, or ‘cervix,’ often becomes thin due to the action of LH. When a woman takes a pill such as Ovral L, this mucus hardens and inhibits the passage of sperm into the womb, lowering the number of tired sperm that are unlikely to reproduce correctly.

When such a cocktail of hormones is administered for a certain period, say 21 days, and then abruptly terminated, the womb lining (endometrium) undergoes artificial ripening in the presence of the hormones and sheds in their absence.

This purposefully caused bleed occurs after the pill cycle and is referred to as a “withdrawal bleed.”

As a result of the preceding impacts, in many locations throughout the human body, the Ovral L birth control pill is very efficient in preventing pregnancy. In addition, it has a low failure rate, with an annual rate of between one and two pregnancies per 100 women.

Women starting the pack for the first time should do it on the first day of menstruation. Simultaneously, those on a prior box should begin precisely seven days after the last active tablet was taken or immediately after the last placebo pill was taken, regardless of the severity of the withdrawal bleeding. The active ingredient is ingested first.

Each active pill is taken daily, without interruption, at about the same time each day, usually before bedtime. Pink placebo pills, if any, are started after the active white tablets are finished.

After a first-trimester miscarriage or abortion, or 21 to 28 days after a second-trimester termination or miscarriage, a pack of Ovral L contraceptives may be started.

When one or more pills are missed, hormone levels in the blood fall below the necessary level for optimal pregnancy prevention, resulting in pill failure. Fortunately, remedial methods, as explained below, may be accessible in certain instances, although secondary or additional contraceptive measures may also be required.

Taking the missed dosage as soon as possible is critical when a single tablet is forgotten, ideally within 12 hours, even if this means taking two pills concurrently the following day.

Two or more pills were skipped: In this situation, she should take two tablets consecutively for two days after the last day of default. Typically, the rest of the pack is subsequently finished. However, additional barrier contraception such as a condom or diaphragm is necessary for seven days. This remedy is ineffective if two tablets or three or more pills are missed during the third week. You should delete the old pack and create a new one in these circumstances.

Missed prescriptions need special attention at the end of the cycle to minimize withdrawal hemorrhage. Medical counsel must rule out the potential of unwanted pregnancy due to contraceptive failure without a withdrawal bleed.

Menstrual cycle control: Month after month, regular use resulted in complete suppression of ovulation and decreased withdrawal bleeding. Dysmenorrhoea, or period pain, is also a less prevalent problem. This kind of cycle management is desirable in women with irregular or dysfunctional uterine bleeding due to a variety of causes both connected to and unrelated to the genital system.

Interactions Between Sex Hormones Globulin (SHBG) is a blood protein with a high affinity for testosterone, its derivatives, and other hormones. The more androgen bound to SHBG, the less androgen is accessible in the circulation to generate unwanted virilizing male effects in women, such as greasy skin, excessive facial and truncal hair, acne, and other adverse effects such as increased insulin resistance and blood sugar levels. Ovral L increases SHBG levels gradually, lowering free androgen levels and favoring hyperandrogenic situations. Consequently, Ovral L may be used with other medications to treat acne, polycystic ovarian disease, and hirsutism.

This is a collective name for a group of symptoms that occur three to four days before menstruation. PMS symptoms such as bloating, breast tenderness, groin pains, weak limbs, generalized exhaustion, headache, mood swings, and seldom eyesight issues are recurrent and compound over time. Therefore, oral contraceptives are crucial and valuable in treating premenstrual syndrome.

Ovarian and endometrial cancers (womb malignancies) significantly decrease when the pill is used for three to four years. The protective benefits last up to 10 years after treatment is discontinued.

These are minor side effects related to using the Ovral L birth control pill.

Amenorrhoea is the absence of a withdrawal bleed that may occur after prolonged usage due to blood levels persistently above the withdrawal threshold during pill-free periods. It is not permanent and is completely reversible if the medicine is discontinued.

Breakthrough bleeding is a kind of red spotting or slight bleed that occurs throughout the active pill’s cycle, most often during the early cycles. It dissipates with continuing use and may, on rare occasions, need medical treatment for more worrisome bleeding.

The following are some of the possible side effects of the contraceptive pill Ovral L:

Closure of the arteries and veins may cause myocardial infarction, heart attacks, and strokes.

Cervical (Mouth of the Uterus or Womb) Cancer, Breast Cancer, and Liver Cancer are all connected with an increased risk (hepatocellular carcinoma). On the other hand, hepatic adenoma, gallstones, gall bladder inflammation, bile stasis, jaundice, and pancreatic inflammation are benign liver tumors.

Predisposition to build and accumulate dangerous cholesterol in the blood vessels.

Contraindications to Using Ovral L as a Contraceptive

Women with one or more of the risk factors listed below cannot use contraception or the Ovral L contraceptive tablet.

Smoking and aging both enhance one’s propensity for blood clotting. Consequently, women who smoke and are over 35 who use Ovral L have a significant risk of severe and potentially fatal cardiac and/or vascular adverse effects.

Barrier contraception must be used with Ovral L to prevent HIV and other sexually transmitted illnesses.

On the other hand, medications that increase Ovral L blood levels increase the risk of developing more severe adverse effects. These include Atorvastatin, vitamin C, acetaminophen, indinavir, and fluconazole.