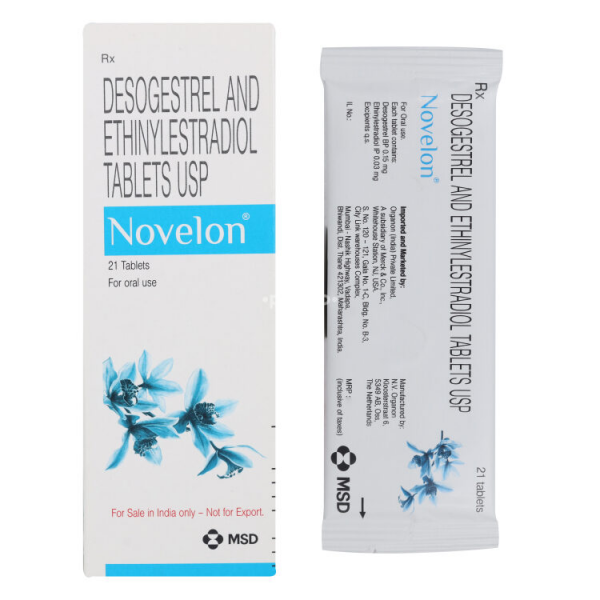 Novelon is a low-dose oral contraceptive tablet that combines the third-generation progestin ‘Desogestrel’ with the time-tested synthetic estrogen ‘Ethinyl Estradiol.’ This combination combines to make a unique medication that protects against unintended pregnancy.

What Is Novelon’s Contraceptive Pill Formulation?

Novelon is an oral contraceptive pill combining the third-generation progestin ‘Desogestrel’ with the time-tested synthetic estrogen ‘Ethinyl Estradiol.’ This combination results in a one-of-a-kind medicine that prevents unwanted pregnancy.

Due to its extensive use is a critical component of the medication arsenal used to treat conditions such as dysfunctional bleeding (hemorrhage), polycystic ovarian syndrome, premenstrual disorder, acne, and hirsutism. Additionally, we offer Yasmin Birth Control Pills, a comparable combo drug.

Markets for Schering-Plough – MSD pharmaceuticals Novelon pills are available in blister packs of 21 tablets. On the back of the box, directional arrows and the days of the week are printed above each tablet. These arrows represent a daily progression consistent across the three weeks or 21 tablets necessary during this period.

Organon® is a subsidiary of Schering-Plough® / Merck® & Co. Inc. Merck’s website may be accessed via www.merck.com.

Each package contains 21 active tablets containing 0.030 milligrams of Ethinyl estradiol and 0.150 milligrams of Desogestrel. Desogestrel is a progestin, while Ethinyl estradiol is an estrogen. Therefore, they are made at very low doses, resulting in fewer unwanted effects while maintaining precise control over conception. These white tablets, which contain hormones, must be taken daily for a period of 21 days.

The Mechanism Of Action Of Novelon

Novelon functions via a complex web of disruptions. It interferes with the normal menstrual cycle’s operation. To inhibit natural ovulation, egg release, and implantation or embryo embedding, the female body’s sex hormone process is purposefully interrupted.

Combining estrogen and progestin in a contraceptive pill inhibits the activity of two essential brain chemicals. These are the hormones FSH and LH.

Indeed, they are gonadotrophic hormones that activate the ovarian and vaginal tract of females. They moderate a series of actions in conjunction during the menstrual cycle. Consequently, they progressively develop the egg inside the ovary’s dominant follicle and prepare the womb lining or endometrium for the fertilized egg. When the levels of these hormones increase throughout the mid-cycle, they burst the dominant ovarian follicle, resulting in egg release or ovulation.

Ethinyl estradiol and Desogestrel inhibit the production of FSH and LH in the blood, impairing normal menstrual function, ovulation, and subsequent implantation. As a result, the release of eggs is impeded; the endometrium, or womb lining, becomes thick and mushy, making it unsuitable for embryo transfer.

Additionally, Novelon strengthens and thickens the natural mucus secretions located at the mouth of the womb or cervix. This reduces the capacity of sperms to enter the mucus barrier.

Despite being a progestin, Desogestrel has modest anti-androgenic properties that help minimize greasy skin and excessive hair growth.

The Novelon blister pack comprises 21 hormone tablets that must be taken on a relatively constant daily basis to sustain and maintain medicine levels in the bloodstream above a specific limit or threshold.

If this is the first time you’re utilizing the pack, starting on the first day of menstruation is best. If you are presently using oral contraceptives of any kind, Novelon should be begun the day after the last placebo pill. Novelon is administered in packets without placebos precisely seven days after the completion of the twenty-first hormonally active tablet or on the first day of withdrawal bleeding.

Novelon may be used after abortions and miscarriages; she may transition from vaginal rings to progestin-containing implants/depots or intrauterine devices. However, the method of administration and the need for further protection varies per instance, and medical guidance is required to discover the specifics.

Withdrawal The term “bleeding” refers to the menstrual-like bleeding that happens after a woman has finished her 21-day course of active tablets. It often happens three to four days after the last medication was active. It resembles menstruation and provides confidence that pregnancy has been appropriately averted. However, it is far less in quantity and duration than menstruation and is associated with minimal pelvic pain or anguish, unlike menstruation.

Missed tablets pose a concern since they reduce the drug’s blood concentration and the ability of Novelon pills to provide contraceptive protection. While medicine missing is an avoidable hazard, it is a frequent occurrence that must be avoided. In addition, because Novelon’s ability to reduce ovulation and restrict conception is weakened, it cannot serve its intended role.

If you forget to take a Novelon tablet, take it as soon as possible, preferably within 12 hours; otherwise, you may have to take two tablets concurrently the following day.

If she misses two doses within the first two weeks of treatment with Novelon, she should take two pills for two consecutive days beginning with the day she remembers the incident. Additional contraceptive protection, such as condoms or a diaphragm, must be worn during coital acts for a period of up to seven days after the event is remembered.

When two tablets are missed in the third week of the cycle, or when three or more prescriptions are missed during the cycle, the blister pack in use must be discarded. Then, a fresh pack of Novelon contraceptives must be started and completed. Again, for up to 7 days, additional barrier protection using condoms or diaphragms is recommended in this scenario.

If pills are missing, close monitoring of the withdrawal bleed is necessary. Whether an unexpected pregnancy occurs, medical treatment must be sought to confirm or rule out the possibility. Novelon may produce stomach discomfort on its own. Vomiting for up to four hours after pill delivery should be considered a missed tablet since a part of the pill may have been evacuated, and blood hormone levels cannot be guaranteed.

Novelon’s clinical uses in contraception include the following:

Their failure rates are very low, averaging one to two per hundred women yearly. When the advantages of low risk of ill effects, simplicity of administration, cheap cost, and broad availability are considered, they constitute the ideal contraceptive for the contemporary woman seeking discretion and safety.

It is important to note that NOVELON does not give protection against HIV or other sexually transmitted infections and does not provide a license for irresponsible sexual behavior. Indeed, over time, this misconception about the pill’s effectiveness has led to unclean sexual habits and an increased risk of cervical cancer. Therefore, a blood pressure check, biochemical/liver/kidney function blood tests, PAP screening, and smoking cessation are indicated before starting the medicine.

Women who have abnormal uterine bleeding as a result of a variety of circumstances benefit the most. The pill’s regular monthly cycle withdrawals with little blood loss and no discomfort make it the best option in these situations.

Novelon protects several common benign gynecologic disorders. Among these is the prevention of ectopic pregnancy, the control of uterine fibroids, the reduction of pelvic inflammatory disease, the amelioration of endometriosis, the elimination of iron deficiency anemia, benign breast disorders, and functional ovarian cysts. Finally, it buffers the painful symptoms of Premenstrual Disorder or Dysphoria.

Even after a year of usage, studies have shown that the tablet significantly reduces the incidence of womb/endometrial cancer by 50%. This advantage sometimes lasts for more than ten to fifteen years after the pill is removed. The pill’s presence of progestin is hypothesized to protect against cell division in the womb lining cells, conferring this benefit. Ovarian cancer patients benefit much more from pill use for as little as six months, with a 40% risk reduction. When the pill is taken for ten years or more, this risk decreases to 80 percent. Again, the benefits accrue over time and may last up to 15 years.

Novelon pills often produce mild side effects. However, adverse effects are likely to be transitory and typically controllable. These include the following and have the potential to influence almost every system in the body.

The Negative Effects of Novelon

Contraceptives predispose and increase the risk of acquiring the following potentially fatal or severely disabling diseases or disorders.

The Novelon Contraceptive Pill should not be used in the following situations:

Ampicillin, Penicillin, Rifampin, Carbamazepine, Lamotrigine, Diazepam, Barbiturates, Nevirapine, and Ritonavir are just a few of the medications that may decrease the efficacy of Novelon oral contraceptives.

It is essential to inform your doctor of the medications you are currently taking before beginning contraceptive pills or adjusting your contraceptive strategy.

Novelon Tablets Can Be Purchased Online at Your-Safe-Abortion.com; Novelon tablets are available. Novelon pills are packaged in a blister pack with 21 tablets.