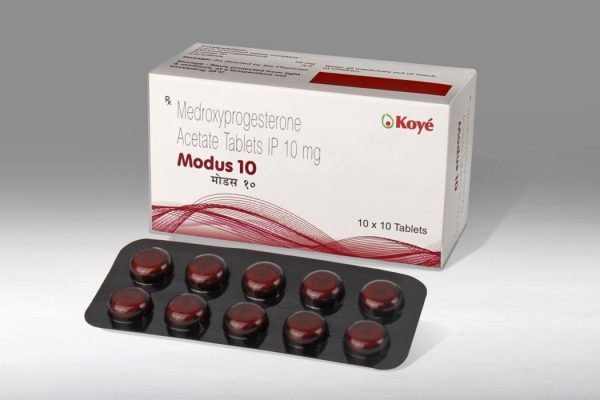 Progestin is a hormone generated by the ovary during the menstrual cycle’s post-ovulatory phase. Progestin is a generic name that refers to anything that promotes pregnancy. Progestin’s most fundamental role is a chemical that turns the estrogen-primed womb (endometrium) into a secretory state, enabling the continuance of pregnancy if it occurs.

What Is The Modus Tablet?

Additionally, the secretory or moist endometrium sheds rapidly in the absence of pregnancy. Progestins have been synthesized artificially since the 1950s; they have witnessed several advancements throughout generations, and the fourth generation is presently in use.

One such synthetic progestin is Medroxyprogesterone. Although a first-generation type, Modus has practical applications in various women’s health issues, ranging from dysfunctional uterine bleeding to cancer hormone therapy.

Additionally, we provide Depot Provera Contraceptive Injection, including the active ingredient Medroxyprogesterone Acetate (MPA). This medication is used for contraception and other purposes.

Modus 10mg tablets are manufactured by GlaxoSmithKline Pharmaceuticals and contain the formulated salt of the first-generation progestin Medroxyprogesterone.

Modus is a prescription medication with the active ingredient medroxyprogesterone acetate (MPA). Modus pills are available in blister packs with ten tablets in either 2.5mg or 10mg.

Manufacturer of Modus Tablets. GlaxoSmithKline is a pharmaceutical business. www.gsk.com

How do Modus tablets work? – Pharmacodynamics and Modus Operandi

Although progestins are most often used in conjunction with the oral contraceptive pill, Medroxyprogesterone is not generally available in its oral form owing to the desire for more potent and newer progestin agents. Progesterone is involved in a range of female genital system processes. It increases mammary gland development to prepare the breast for lactation.

Progesterone, especially in the uterus, alters the secretory function of an estrogen-treated endometrium by increasing blood flow, gland tortuosity, and secretions.

Menstruation occurs due to progesterone shortage due to the loss of this secretory endometrium (womb lining). Similarly, artificial menstruation, also called “withdrawal bleeding,” occurs when an exogenous progestin suction period of five to fifteen days is withdrawn.

Prolonged exposure to continuous progesterone and long-term injectable formulations of Medroxyprogesterone causes the uterine lining to become soggy or spongy (decidualized), which is highly contraceptive.

This effect becomes more pronounced with time, eventually reaching menopausal symptoms when endogenous estrogen is eliminated. This condition is crucial for preventing and treating estrogen-dependent cancers such as breast, uterine, and kidney tumors.

Indications and Modalities for Modus Dosage

Modus dose is defined or adjusted based on the clinical situation in which it is utilized. For example, dosages ranging from 2.5 to 5 or even 10 mg per day are used in single or divided doses to treat dysfunctional uterine bleeding in the latter half of the menstrual cycle.

2.5mg daily is used at the end of the HRT or Hormone Replacement Therapy cycle.

Greater doses are utilized in cancer prevention and palliative treatment, ranging from 300 mg to 1.5 grams daily, depending on the tissue. Other businesses, like Deviry, provide formulations with a greater strength of 100mg each tab.

Modus is used in the second part of the ovulatory cycle. This phase is called the luteal phase, and many women have low progesterone levels at this time, which results in irregular menstrual cycles or flow. Between days 16 and 25, this supplement aids in the healing of irregular cycles.

Menorrhagia or abnormally heavy periods also benefit from this treatment, especially when administered cyclically over three to six months. In addition, due to the presence of estrogens throughout the early portion of the menstrual cycle, the medicine is more successful at reducing menstrual pain and flow volume, hence treating dysmenorrhea and iron deficiency anemia (from excessive blood loss).

Amenorrhoea is defined as the absence of menstruation for six months or more in a woman who has previously menstruated regularly and is not nearing menopause. Numerous causes may contribute to the development of this condition, including stress, rexia, extreme exercise, and thyroid or pituitary abnormalities. While identifying the cause is vital, Modus is critical in reintroducing menstruation to these women through a withdrawal bleed.

Modus must be used in the second half of the cycle in combination with low-dose estrogens in the first half of the process in women with an intact uterus undergoing hormone replacement therapy.

Modus protects the endometrium of the uterus from excessive and unopposed stimulation, hence preventing malignant changes.

This is a relatively common ailment in the current day. It presents itself in various ways, the most prominent being anovulation, oligomenorrhoea, and infertility. Women with Polycystic Ovaries benefit from cycle resets and testosterone suppression. Modus supports these women in resuming their periods and prevents the uterine lining from thickening uncontrollably.

This is a condition caused by ectopic endometrium growing outside the uterus. It is mainly characterized by menstruation pain (dysmenorrhea) and infertility concerns.

Modus is an efficient medical treatment procedure for simple endometrial hyperplasia, a premalignant lesion of the womb lining or endometrium. Modus, whether provided daily at a dosage of 10 to 20 mg or cyclically 12 to 14 days per month, has been shown to assist numerous women in overcoming this condition. On the other hand, Mirena and Megestrol are recommended in situations of complex or atypical hyperplasia.

Modus is combined with hormone treatment to treat PR + ve breast cancer (progesterone receptor expressing). In addition, MPA may be used to treat advanced endometrial, prostate, and kidney cancers on a palliative basis, although at substantially higher doses.

Modus tablets may produce temporary, mild side effects. The side effects of Medroxyprogesterone vary according to the dose and type used.

Modus is associated with a higher incidence of adverse effects when provided in 2.5 or 10mg doses for short periods to treat dysfunctional uterine bleeding or secondary amenorrhoea than Depot Provera or higher doses used in cancer treatment regimens.

Teratogenicity is seen in women who take Modus while unaware of or uneducated about pregnancy by webbed toes and fingers, masculinization of female newborn genitalia, and low birth weight children.

Modus, like other progestins, increases fluid retention and fat accumulation. Therefore, weight gain is mainly proportional to the duration of therapy.

Breast cancer may be utilized for a prolonged period beyond two years, primarily by younger women aged 25-35.

The following medicines are effective at impairing Modus’s efficacy:

Aminoglutethimide, Griseofulvin, Rifampin, Phenobarbital, Phenytoin, and Carbamazepine are all known enzyme inducers that reduce the effectiveness of MPA. Therefore, these medications should be handled with care when used for contraception.

Plasma gonadotropin levels, urine steroid levels, and coagulation profiles may all be affected while taking MPA.

Contraindications And Precautions About Operational Mode

Modus should be avoided in the following situations, and care should be used if medical counsel is sought: